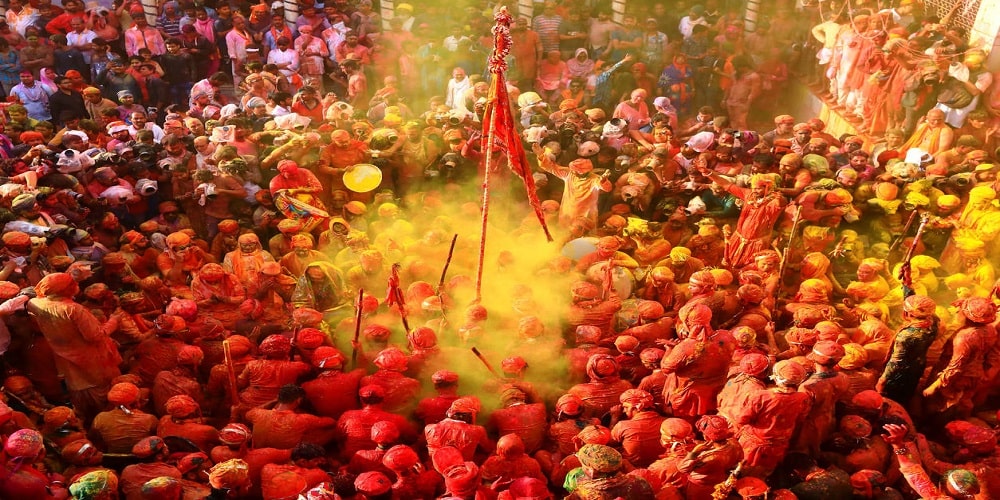 Temples At Vrindavan is extolment not in India but across the globe.

as Lord Krishna spent his childhood along with

his friends, and it’s situated at the bank of the river Yamuna.

Several recorded incidents clear to us that Lord Krishna

has rolled out the message of love while doing raasleelas

with Radha, Krishna used to steal clothes of their Gopis at

the time of their bathing in a pond, and Lord Krishna killed lots

of monsters from the place he was residing.

The collection of five thousand Mandirs near to

The Vrindavan was restored by Chaitanya Mahaprabhu in 1515 when

and vanished place related to the lord Krishna and helped

to regain its gone charm amongst the pilgrims.

The Chaitanya Mahaprabhu walked the blest jungle along with all

his god power and was able to found the sacred places

in and around the city, since then this Holy place

is visited by all Hindu saints once in their lifetime.

These days’ local people chant Radha Krishna every day in their routine life.

As we notify earlier that Vrindavan is fully surrounded

by Five Thousand mandirs which make it a vital destination for pilgrims.

Out of this temple, few are very primitive and a lot are destroyed

at the time of Mughals mostly in the Aurangzeb kingdom.

of Lord Krishna life in front of their devotee

to get peace, insight and Vedic knowledge, here Bhagwat Geeta is taught in English

Along with the temple, Kesi Ghat is also a centre point of attraction to visitor activities,

This Ghat is situated near Nidhivan and banking on the Yamuna

who came to kill Lord Krishna in the form of huge horses.

and take a dip in this river to get free from their all sins, evening rituals

are also performed here as an Aarti which enhances the charm of this Ghat.

Banke Bihari Ji Temple is the most visited and famous temple

of Vrindavan where Lord Krishna is worshipped. This temple is constructed

by Swami Haridas, He was the teacher of primitive famous singer Tansen

This temple is constructed in Rajasthan style

or Vihari means “enjoyer”. This shows how Krishna is bent in three places

and consequently got its name as “Banke Bihari”

in Tribhanga position. There is a myth that a Hindu saint hidden

the sculpture of Lord Krishna below ground at the time of the Mughal invasion.

and he got tired, decided to take rest at the same place, midnight

he dreamt that Lord Krishna asking him to pull out

from under the ground. Suddenly he dug out the place

and find out Lord Krishna Statue and construct the temple,

as this place is a holy place that attracts a lot

of visitors over here throughout the year.

Banke Bihari Temple Aarti timings are from Morning 7:45 AM to 12:00 PM

and situated in Vrindavan where Lord Krishna is worshipped

this temple, this temple is dedicated to Lord Krishna & Radha but

you will not find any sculpture of Radha in the temple.

the answer is Gopala Bhatta Goswami created this temple,

it took several years to get completed

This temple was constructed in 1542 and it is placed one

of the admired temple amongst all the temples.

This temple is beautifully constructed which salute ancient Indian

for their culture and religion, There is a splendid crown which

Iskon temple was constructed in 1975 and situated in Vrindavan,

it’s also known as Shri Krishna Balaram temple, It was a dream

of Swami Prabhupada(The Founder-Acharya of Iskon) which comes true

they used to play in their childhood before several centuries ago.

This Iskon temple Vrindavan is situated in Raman Reiti area in Vrindavan,

this temple has become the major attraction

for neighboring area Like Delhi and for overseas devotee

The devotee who is visiting this admired temple is fascinating

by evening Aarti and the classes of Shrimad Bhagwat Geeta

as going every day in Hindi & English

Not only in India, but this Srimad Bhagwat Geeta is also taught

all across the world, at the time of kirtan generally devotee lose

their control and start dancing to music in a cultured way.

from early Mangala Aarti at 4:30 AM, and goes until evening Sandhya Aarti at 7:00 PM.

then the best option for stay is Iskon Temple guest house,

which provides you all the facilities like a five-star hotel.

in the world situated in Karnataka, associated with Iskon rejuvenation action.

Hotels near Iskon temple Vrindavan: You can get varieties of hotels near

the temple, you can book easily your hotel through different portals

or you can access directly to hotels it’s all nearby.

Iskon temple Vrindavan to Prem Mandir Vrindavan distance: The distance between in

of forest is fabulous, situated in Vrindavan, This huge garden

is most admired by the devotees who come every year to Vrindavan to see the same.

According to a myth people believe that Krishna do raaslilas here

to go here at night A small complicated sculpture mandir

is made inside the garden, which is dedicated to Lord Krishna

are very famous not in locals across the globe

Nidhivan is the holy blest jungle which is fully covered

with Basil (Tulsi) trees and all trees and they are different

from each other, according to legend this trees are 4000 in count

which considered as Gopis and every night Lord Krishna do raaslilas with them.

Nidhivan Vrindavan Timings: In summer it opens early morning 5:00 AM to 8:00 PM

Vrindavan and Nidhivan distance: Its 17 min and 7.4 Km away

Nidhivan Sarovar Portico Vrindavan: This hotel has got modern style but still it gives

you the essence of holy city. This hotel is just 6.9 Km far away

from Bankey Bihari Ji Temple at Vrindavan and just 11.4 Km from

the glorious Iskon temple. Travels can book their space in this hotel

from the ancient history time, like Rang Ji temple or Ranganatha temple

which has Dravidian style and it was constructed in 1851,

The Ranganatha Ji was the incarnation of Lord Vishnu, which makes

this temple fully dedicated to Lord Vishnu, One major allure of this Mandir

is 50 feet golden pillar and the entrance which is six Storey tall.

The maximum visitor or devotee comes here in the month

of March and April at the festival time called Bramotsavam,

as devotee call this Rath mela also, because the pilgrim exert

the chariot to the nearest garden.

The Gopeshwar Mahadev Temple is another huge place

of worship situated in Vrindavan. The sanctuary is one of only

is firmly connected with Lord Krishna.

As per the myth, Lord Shiva wanted to see the Raas Leela dance between Krishna

and Gopis but he was male so couldn’t allow entering the place.

a female attire and entered to place, subsequently, a Shiva linga is placed

in temple in attire of female and devotee worship the same.

Gopeshwar Mahadev Temple Timings are from 9:00 AM to 9:00 PM throughout the week.

the same and it hardly 1km away from the railway station,

this temple was constructed in the kingdom of Raja Man Singh

in 1590 who was governing Amber at the time.

The Govind Dev Temple at Vrindavan history is,

the architecture of Govind Dev Temple Vrindavan is distinctive

and mixed principles of Hindu, Muslim and Western-style.

When Aurangzeb invaded the place he destroyed the key part

of the temple, but the temple didn’t lose his glory, still, it’s

a vital destination for devotes who comes across the world.

the temple is fully decorated with blossom and glows.

Once you enter the temple you will find many stairs which

will take you to the main hall, where you find a big lotus in the ceiling which

is fully made up of hands, the inner portion is made up of silver and marble.

Govind Dev Temple Vrindavan Timings are in the morning it opens at 8:00 AM to 12:30 PM

The Radha Gokulananda Temple is placed amongst

the Keshi Ghat and the Radha-Raman Temple is

an old-fashioned, heavenly sanctuary devoted to a collection of Hindu gods.

The lovely sanctuary admires Radha and Vijaya Govinda among various others.

In the early stage all idols were adored separately,

the temple and idols were kept together

the earliest time temples, still this temple grasp its sense.

Along with the temple, Kesi Ghat is also a centre point

of attraction to visitor activities, This Ghat is situated near Nidhivan

the monster called Keshi, who came to kill Lord Krishna in the form

and take a dip in this river to get free from their all sins, evening rituals are

also performed here as an Aarti which enhance the charm of this Ghat.

Keshi Ghat Vrindavan Timings are 6:00 AM to 8:00 PM throughout the week,

Mathura Vrindavan ki Holi is absolutely an encounter for a lifetime for the believers.

and Radha grew constantly. Legends say that Krishna was keen

on her reasonableness and used to grumble about his ‘gloomy’ face to his mom.

at Radha and paint her face with numerous shadings.

From Krishna place Nandgaon, Krishna and his closed companions used

to come to Barsana – Radha’s town to shading Radha and her companions.

The young ladies used to hit the companions, powerfully be that as it may, with sticks.

Like each and every other Radha-Krishna Leela, this additionally turned into

a custom and has just developed to be a more bright

of time and proceed till the last day of the festivals. Advise us on the off chance that

you feel that any Holi festivity would be superior to that of where it began from.

This temple is very old in this region, it situated in Kali Ghat in Vrindavan

In early time wild forest was placed at temple location, inside

In the duration of Mughal dynasty lot of temples were ruined.

At present we are worshiping the duplicate copy of unique image,

If we see the construction of this temple is very strong

at present, it was done by Shri Nandalal Vasu, the actual

one was ruined at the time of the Mughal dynasty

all the 300-year-old Thakur Dalan of Madan Mohan

at chitpur road near kumartuli in the bag bazaar area.

2 thoughts on “Temples At Vrindavan” 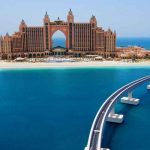 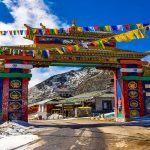